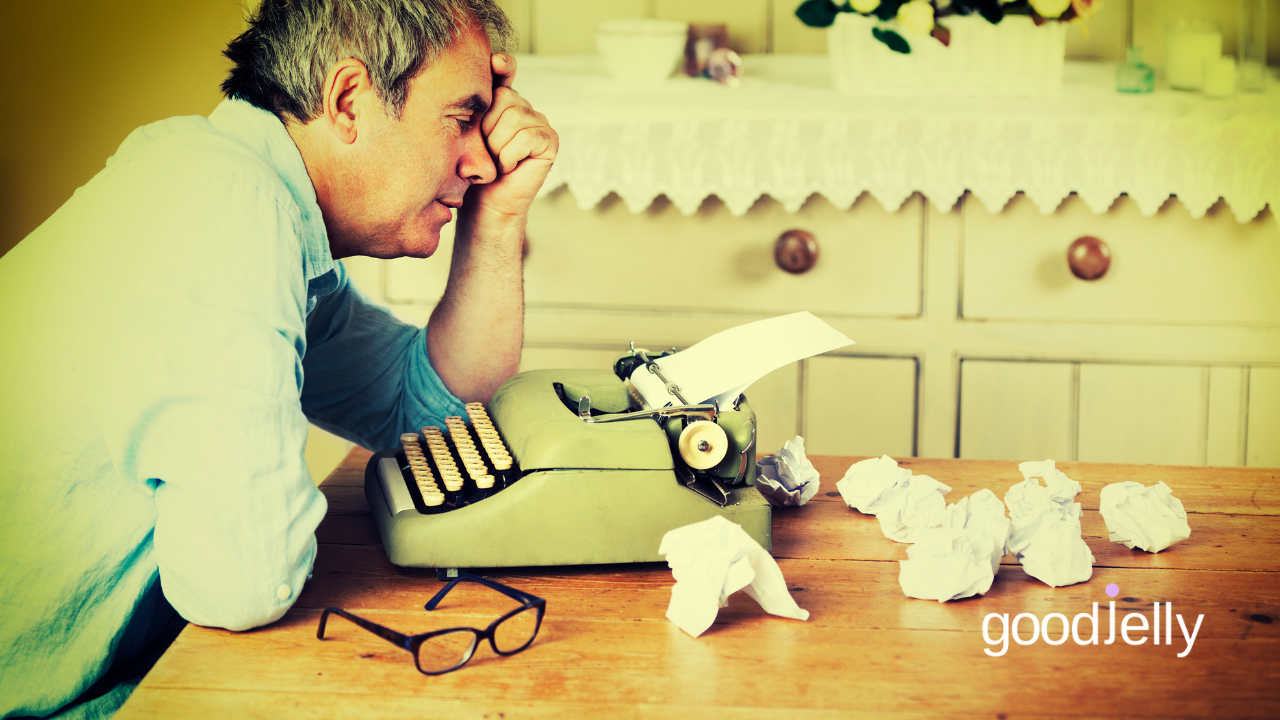 Last week, I shared the first five causes of writer's block I identified after getting peeved by something another writer wrote about writer's block that, in my opinion, was lacking in compassion and not overly helpful. If you missed that post, pop back to get the full deets on my ire and the first five causes, which were Clutter, Exhaustion, Health Conditions, Boundary Issues, and Perfectionism. Let's dive into the next five now.

Remember, the purpose of my exploration was not to create rigid, mutually exclusive categories but rather to expand my thinking around possible causes, which would in turn inform possible solutions.

Writers who are stressed might struggle with writing, as many writers discovered during the pandemic. According to the American Psychological Association, stress "is typically caused by an external trigger. The trigger can be short-term, such as a work deadline or a fight with a loved one or long-term, such as being unable to work, discrimination, or chronic illness. People under stress experience mental and physical symptoms, such as irritability, anger, fatigue, muscle pain, digestive troubles, and difficulty sleeping."

None of those symptoms sound conducive to getting your creative jam on, yet creativity is often a mechanism we humans use to cope with stress. In addition, research on creativity shows that stress is not always universally bad for creativity.

Some factors that influence if we get felled by stress or not include: if we believe there are actions we can take to successfully mitigate the stress; if the stressor involves being evaluated by others; and our individual temperaments, histories, and vulnerabilities.*

It is important to emphasize this nuanced reality around stress and creativity because writers in my experience can go into comparison-mode very quickly. So-and-so writer is still churning out 50 bazillion words an hour during the pandemic, and are clearly not stressed, so I should be . . .

(I'll let you finish that sentence to the bitter, critical end.)

Stress will impact different writers in different ways. If you suspect stress is getting in the way of you getting your writerly work done, then the power move is to identify the stressor, trust that you have options to at least mitigate the stressor’s impact, and take steps, no matter how small, to reclaim your equilibrium. When you feel better, you'll create better.

What will not help you feel better? Looking outward for "proof" that other writers are not derailed by the same stressor and then beating yourself up as a result. Which is a bit . . . stressful.

Process pickles are my (and Goodjelly's) jam. For me, a writer’s process includes both how they manage their writerly work and their mindset. When writers create new possibilities for themselves in relation to those two pieces of the writerly puzzle, the relief and excitement are often palpable.

Writers sometimes conflate a struggle to make progress in their writing as a skill or creative flaw on their part, when the problem is simply that the way they are managing their work or their mindset is making it harder to get their writerly work done. They end up with struggle or blocks that have nothing to do with their skill as a writer (craft) or with their creativity.

Here on the blog, on Instagram, and most definitely in Goodjelly's signature course The Jam Experience, I am all about helping writers improve the way they manage their writerly work. When you design your writerly work more effectively, many blocks dissipate naturally, and even more powerfully, you'll have new tools and techniques to untangle future blocks that arise no matter their cause.

Sometimes we are stuck (or spinning) simply because we don’t have the craft skills yet as a writer to accomplish what we want to accomplish. Which may mean we have to set aside an idea for a time until we are able to strengthen our craft skills enough to pull it off.

Here is an excerpt from an NPR article where Neil Gaiman speaks to this exact type of craft skills block in relation to The Graveyard Book:

"I knew I had a book," says Gaiman. But when he sat down that afternoon to write he came to a difficult realization after a page and a half: "I am not yet a good enough writer for this idea," Gaiman recalls thinking.

He returned to the idea every few years and came to the same conclusion each time. Then about four years ago, he decided he wasn't going to get any better as a writer and he should just get on with it.

An Inner Critic is the voice, or part of ourselves, that seems to be intent on tearing us down. It concerns itself with grand themes of our lives such as what we do, our relationships, or how we spend our free time. It will also enthusiastically chime in on our daily minutiae, too. For example, it might carp about how you take notes, or load the dishwasher, or even how you brush your teeth.

According to psychologists (and two of my mentors) Hal and Sidra Stone:

"Most people are not even aware that there is a voice or a self speaking inside of them because the Inner Critic’s constant judgments have been with them since early childhood and its running critical commentary feels quite natural. It develops early in their lives, absorbing (or internalizing) the judgments of the people around them and the expectations of the society in which they live. The more difficult or abusive the childhood, the more vicious and abusive the Inner Critic is likely to be." (The Inner Critic, Hal Stone & Sidra Stone, Voice Dialogue International.)

If you suspect your Inner Critic is at least partially responsible for your writer’s block, your first instinct might be to go into fight mode and try to take it out. I recommend a different approach that evolved from my work with Hal and Sidra, one based on kindness and partnership. If you are curious about that possibility, you can read more about it in my blog post On Inner Critic Love.

I am going to talk about trauma very carefully for two reasons. Firstly, because I am a writer, not a trained trauma specialist. Secondly, because writers struggling with trauma and the behaviors, choices, and yes, blocks, that result are who I believe that author (who peeved me so) was dismissing as “claiming victimhood.”

In my opinion, that view is neither informed by the latest research on trauma, nor is it compassionate in any way. But it is not uncommon, as trauma can manifest in so many different ways and is not as easily “seeable” as a physical injury like a broken leg. Which is why it can be misunderstood or dismissed as not real, even by those who experienced the trauma, who just want to be done with it already. (Speaking from experience on that last point.)

So to level set, let’s start with some stats. According to a booklet created by The ChildTrauma Academy and written by Dr. Bruce D. Perry:

Each year in United States more than five million children experience some extreme traumatic event. These include natural disasters (e.g., tornadoes, floods, hurricanes), motor vehicle accidents, life threatening illness and associated painful medical procedures (e.g., severe burns, cancer), physical abuse, sexual assault, witnessing domestic or community violence, kidnapping and sudden death of a parent. More than 40% of these children will develop some form of chronic neuropsychiatric problem that can significantly impair their emotional, academic and social functioning. The majority of these neuropsychiatric problems are classified as Anxiety Disorders, with the most common being Post-traumatic Stress Disorder (PTSD).

Hopefully, most of the children who experience trauma will survive and grow up. Some of them will become writers. And let’s face it, the writerly path has aspects that even a writer with no major traumas in their past might find a bit triggering on occasion. It can be dicier for those with unresolved traumas.

If you suspect unresolved trauma might be contributing to a creative block or creative struggle, then definitely extend kindness and compassion to yourself. One of the most powerful discussions on healing trauma I have read of late is Dr. Perry’s book with Oprah Winfrey What Happened to You? As a side note: The hardback version is beautiful from a design perspective. It conveys possibility, calm, and compassion.

My hope for all writers who have experienced trauma is that they, no we, find our path to healing so that our emotional wounds transform to wisdom, allowing us to gracefully use those challenging experiences as fuel and fodder for our art.

The Cause of My Block

I promised last week that I would share what ended up being the cause of that period of block and struggle that started this whole analysis. Long time readers may have already guessed as I have written about it before, for example in this post about resilience.

The cause was old trauma getting triggered.

That's why that author’s dismissiveness toward struggle with trauma, deeming it “playing the victim” peeved me so. But what was interesting is that my irritation at the author actually felt like an indicator of progress. I had read that passage many years before and had not been stopped by it at all. Most likely thinking to myself, “Yeah, I’m not going to play the victim around what happened to me.”

The fact that this time around I was annoyed meant I had reclaimed some of my gumption. I was (and am) able to say, "What happened sucked and acknowledging that does not mean I am 'playing the victim.'"

I didn't buy that author’s unhelpful belief framework and instead moved toward what would actually help me. In my case, regular personal work with a therapist. I couldn't have made that move, that commitment to my healing, had I believed in that other writer’s one-size-fits-all solution: Just get over it and write.

Do I believe I’ve created an exhaustive list of all the causes of writer’s block? Goodness, no. Yet, I’m happy that I got us up to at least ten.

The writer who peeved me so decided there were only two things before the thing (laziness or playing the victim) and one clunky “get over yourself” solution. I hope with this post that I have expanded your sense of possibility around the causes of and solutions for writer’s block.

I also hope that if you find yourself in a state of struggle or block and none of the causes outlined here resonate, that you get busy solving the situation with curiosity and compassion, looking for your particular thing before the thing. That will most certainly inform the solution—i.e., your way through the block.

*If you want to read more about the research on stress and creativity, check out The Creative Brain Under Stress: Considerations for Performance in Extreme Environments.