The 3 Requirements of Writerly Momentum 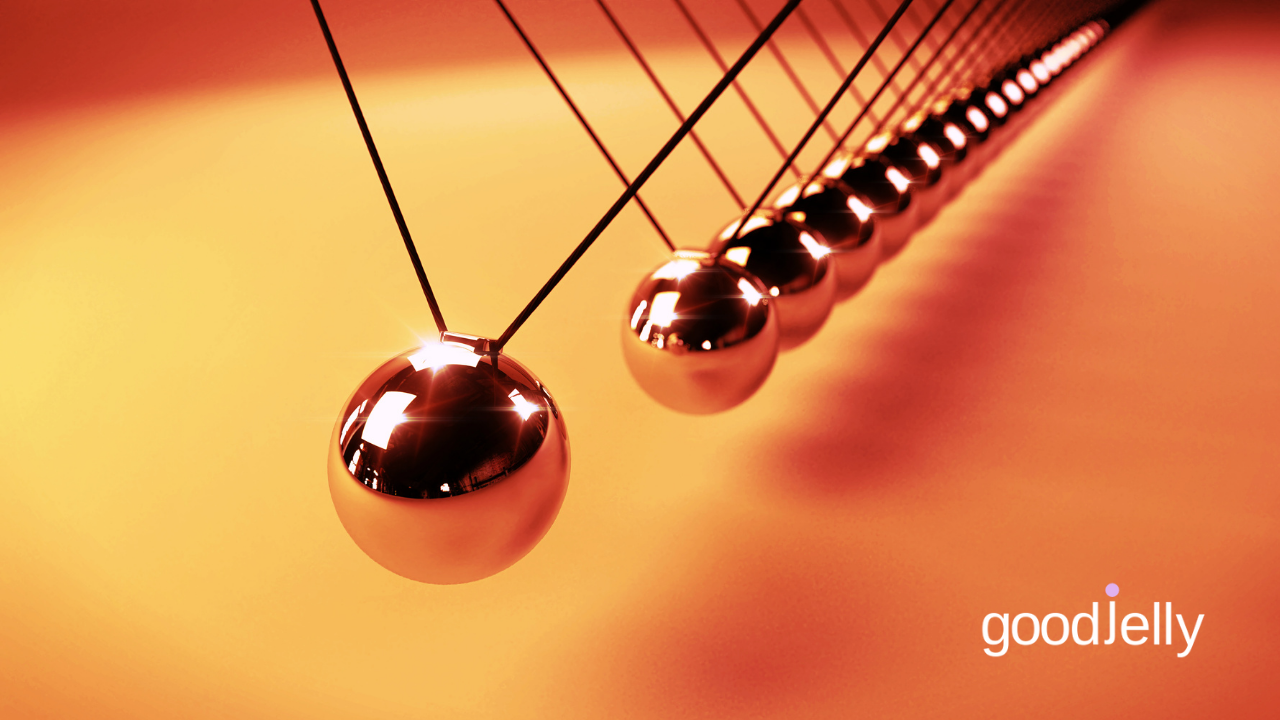 Everything that moves has momentum. That momentum is equal to its mass multiplied by its velocity. But as noted, the direction of the force is part of momentum’s definition. So you can’t just say an object has momentum, you have to say in which direction that momentum is going.

Mass. Velocity. Direction. These are the three qualities we must cultivate in our writing processes to become momentum mavens.

Making Mass out of Mind Work

Writing these days is very heady, very ephemeral work. In the oldest of old days, our forebears etched their words into stone. That had some massive mass. Even in much closer times, writers like Emily Dickinson was creating writerly mass. Consider that her forty hand-sewn manuscript books, or fascicles, take up 1.4 linear feet or 7 boxes, according to the The Emily Dickinson Collection overview page at Harvard’s Houghton Library. That’s some poetry heft.

But these days most of us do not handwrite our novels or even roll page after page into a typewriter. So our work remains massless, floating in the digital ether.

We can however add mass around the work. When we do so, the work becomes more concrete, more physical, more visible.

One of the ways I teach writers how to do this is to create targeted, short-term maps of their writerly work using post-it notes arranged on a wall. Each post-it note is a dollop of writerly mass. The process is simple, powerful, and effective.

To give you an idea of what I mean, one of my recent short-term maps of writerly work (which was focused on getting a fellowship application submitted) included post-it notes that created mass for tasks like:

Along with giving weight to what I was doing, my post-it note array also provided a psychological grounding. It would have been much easier to get down on myself for not making progress on other writerly work if my Inner Critic was saying, “Come on, you slacker, you’re just applying for one fellowship. How hard can that be?”

With my post-it note map, I could redirect myself and my Inner Critic right to my wall. “It is not hard per se, Inner Critic, but there is a lot of steps involved. Steps that take time, that take up space in my day. Chill, okay. This is the priority right now.”

What that means is that giving mass to your writerly work not only helps create momentum, it also helps manage your mindset. Double score!

Note: Can you use task tracking tools like Asana, JIRA, Trello or Things to capture your writerly tasks? Absolutely. My corporate work requires adeptness with tools like that. I find, however, that to create the “mass” effect for writerly work, using post-it notes is more effective.

Victorious Velocity through Mass in Motion

Each day, I would sort out what was the priority for the day, and I would get moving on those tasks. My post-it notes had the work “massed” small enough that I could get at least one task—and usually more—done a day.

Many writers create unnecessary challenges to creating momentum (and to maintaining a positive mindset) by leaving their work chunked too big. That inadvertently creates a stinginess to the surges of accomplishments that their psyche gets. I call these surges  “Done Boosts.” When working with writers, I am often asking them, “How can you define or redefine that task to get yourself a Done Boost faster?”

If I had chunked my work at the level of “Get fellowship package submitted,” I would have had to maintain my momentum with no interim rewards. That is like posting on social media without getting any Likes. It doesn’t feel very good or motivating.

—that still would have been a bit ungenerous in context of the true Done Boost potential. I absolutely was working through many more discrete tasks to get those application parts done, as the much longer list above captures.

Did it take a few minutes to think about what was involved and write those steps on post-it notes? Yes.

And I am good with that.

The five to ten minutes it took me to give my writerly work mass allowed me to earn more interim Done Boosts. Those boosts in turn allowed me to flow through the work with momentum rather than slog through it blindly, relying on willpower and scrappiness to carry the day.

In that aspect, velocity is really about leveraging operant conditioning, i.e., changing behavior through rewards (or punishments.) If you use any social media, you are being operant conditioned on a breathtakingly disconcerting scale with functionality like those aforementioned Like buttons.

In happy comparison, building velocity through Done Boosts, i.e., rewards, uses operant conditioning for the good of your writerly progress.

When you drive to a destination, you keep your end destination in mind, and even if road work or traffic doesn’t send you into unplanned detours, you still make constant adjustments as you go. Slowing down. Speeding up. Switching lanes. Watching your gas or charge level. Swerving to avoid hitting the chipmunk zooming across the lane.

If you plow forward without adjusting to the feedback coming at you, you could run out of gas, get rear ended, or flatten a chipmunk. Not desired outcomes. And all outcomes that could slow down your progress toward your end destination, or stop your progress completely.

Writers get a lot of “plow forward” type advice. Butt in chair, churn out pages, etc. All small goal focused.

I am a process improvement consultant, I believe in productivity, efficiency, and getting things done. And I absolutely believe in small goals. That is what “small massing” your writerly work means: create small goals (and write them down.)

That said, small goals alone may land you in a missing the forest by focusing on the trees scenario. Sure, you will be in writerly motion but not necessarily in writerly momentum, i.e., in motion in the direction you want and need to be to move your writing forward.

A writer once shared with me that he still hadn't finished his middle grade novel. The manuscript at that point was already a hulking 200K words.

So, yes, he was producing (in motion,) but he was not in momentum toward his writerly goal of getting traditionally published. To be in momentum toward that particular Big Goal would have required him to stop writing, regroup on the story's core through line, and likely cut close to 150K of those already written words.

Writerly momentum requires both small goal progress and big goal validation. When you drive somewhere, you take in the feedback (traffic, the chipmunk, stoplights, etc.) and adjust accordingly.

When I work with writers, I invite them to do the same with their writerly process and progress. Regular check-ins are built into the system I teach. These check-ins allow writers to ensure their small goal motion is still moving them toward their Big Goal Destination.

Writerly Momentum for the Win

You can give your writerly work mass by making the work visible and physical through techniques such as noting your tasks on post-it notes. You can add velocity (and generosity) by massing that work small enough that you get many Done Boosts. Finally, you can confirm alignment of small goal direction and Big Goal destination through regular checkpoints.

Integrating momentum into your creative process, using mass, velocity, and direction, will keep your writing (and your writerly adventure) going exactly where you want it to be going:  Straight toward your writerly dreams. Varoom! Varoom!

Want to get your writing done with more ease and joy? Get on the VIP Waitlist for The Jam Experience and be the first to know when registration reopens.